The classrooms in our school are equipped with three professional air cleaning devices. The devices suck in all the air and filter the sucked in air through a HEPA filter that makes all viruses harmless and kills them with specific UV-C light, which damages the DNA / RNA structure of the virus and prevents it from multiplying. The devices are working 24 hours a day.

Of course we cannot guarantee that a device will catch a virus particle before someone has been able to inhale it, but it significantly reduces the chance because infection occurs through clusters of droplets or aerosols (which are also collected by the air purifiers).

Read more about how these air cleaning devices work.
Download our Corona protocol
For all information about prices, discounts en registration go to this page REGISTER. 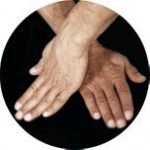 Originally, Shiatsu is a form of Oriental folk medicine, based on the assumption that disturbances in muscles, nerves and organs manifest in the network of energetic channels, called meridians. The energy that flows through these meridians is called Ki, or life energy.

The earliest mentioning of Shiatsu is in the Nei Ching - The Yellow Emperor's Classic of Internal Medicine - written in China 2700 jaar BC. Buddhist monks brought Chinese medicine to Japan in the sixth cenury A.D.. For centuries, Shiatsu has been a traditional system of treatment, passed on for generations. Shiatsu has become recognized as a medical treatment method from the fifties of the last century onward.

In 1964 the Japanese Ministeries of Health and Education officially recognized Shiatsu as a unique and distinct form of therapy using the following definition:

“Therapy, which applies pressure with thumbs and handpalms on certain points of the body, corrects irregularities, maintains and improves health, contributes to alleviating several diseases (several forms of pain, stress, irregularities in the nerve system, etc.) and activates the self-healing capacity of the organism. Has no side effects.”

Classical Shiatsu differs from the traditional Chinese method. The difference between these two is described as follows by Alan Nash, in an article published in the Dutch journal Bres:

“....In western books on acupuncture, overviews are given of which points need to be pressed in order to alleviate symptoms. In classical Shiatsu, the Oriental (Japanese) approach is used, which is based on the Chinese method of diagnosis. This means that four separate methods of arriving at a diagnosis are combined: bo-shin: observation, bun-shin: listening, mon-shin interviewing and setsu-shin: touch.

In setsu-shin, the traditional Chinese acupuncturist relies most heavily on pulse diagnosis in order to track down the Yin/Yang-balance in the organs and meridians. The classical Japanese Shiatsu therapist on the other hand, will use setsu-shin on the Hara to track down the Yin/Yang balance. Hara is to Japanese, what personality, character, nature of someone is to Westerners. The position of the hara is not found in the heart, head or pulse, but in the area between the bottom of the rib cage and the pelvic bones...”

Shiatsu is an art of healing, which is based on a holistic view, the hallmark of traditional Oriental views. The next section is easier to understand when the body is considered a totality of a number of systems which are mutually dependent and influencing each other.

Every system in the body has developed a certain way to flow and communicate. Slight variations in patterns of flow and communication make individuals unique. However, the rules that determine the mechanisms are the same for everyone. We can influence one another with our words, touch and attitudes. Following a diagnosis, the system of an individual can be changed in such a way that the overall functioning benefits.

The mystery behind this is the deep and nonverbal level at which this takes place. The individual will recognize this, and pain or harmful ways can leave the body. The key to this system is the understanding of meridians and the energy flow through them. 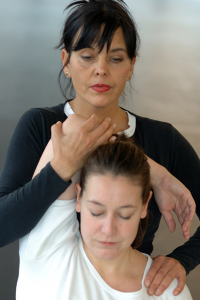 The combination of learning to practice Shiatsu and Do-In is a revelation to most students. Self-confidence, energy and flexibility are enhanced. But there is much more.

Developing the four shins helps to attune and sharpen the senses in such a way that life is viewed in a new light. Perception, feeling and intuition are enhanced.

When someone becomes sensitive enough to recognize anomalies in the system of meridians and has enough knowledge of the mechanisms by which they function, then new insights and breakthroughs will come.

A good Shiatsu-therapist is capable of seeing the cause of the imbalance(s), of knowing where to touch and what this will bring about, thereby helping to enhance the self-healing capacities of the person.

Do you want to know more about DO-IN? Visit our page Nederlandse School voor DO-IN.